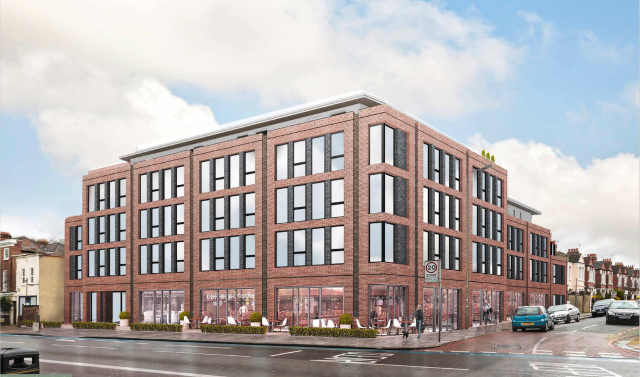 Tooting History group has commented on the planning application for an “Apart Hotel” on the site of Tooting constitution Club at 111-113, Tooting High Street.

The comments are as follows: “I write on behalf of Tooting History Group to comment on application 2018/0230 at 111-113 Tooting High Street. This application for an apart-hotel includes the rebuild of the Clubhouse and a publicly accessible green space within the envelope of application 2016/5408 which was approved (subject to conditions) for residential accommodation and which retained the skittle alley.

An initial public consultation in September 2017 was well attended by our members and others who were hopeful of a better outcome for the buildings. Each planning application for this site has prompted a genuine and widespread response from local residents who feel that what has been proposed is not positive progress. Significant concern for Field House (c1730) and Merton Lodge (c1840) and its green space was acknowledged by Wandsworth Council when the site was granted ACV status in 2015 reflecting its important contribution to the social history of the area and noted as being one of Tooting’s best loved historic buildings.

THG’s concern for the former Tooting Constitutional Club site, evidence submitted at previous appeal hearings and comments on previous planning applications remain relevant and we feel they are not satisfied by this latest proposal. We take this opportunity to maintain our view that; the proposed principal block relates poorly to the character and appearance of the surrounding area by reason of its bulk, mass and positioning on the back edge of the pavement. the proposed building fails to integrate with the local spatial character of the area and harms rather than preserves the setting of the adjacent Grade II listed heritage assets. This part of the High Street has a recognisable period character with a strong sense of time and place. A brick finish, may be considered more sympathetic to the existing heritage buildings but cannot overcome the issues of bulk, mass and positioning.

Furthermore we are disappointed that proposed plans do not retain what THG now know to be the only remaining purpose built, free standing Old English skittle alley in Britain. It is important to note that Historic England whilst declining to statutory list any building on the site acknowledged its entirety to be clearly of local interest and the Georgian Group campaigned for the retention of the both Field House and Merton Lodge. At the earliest opportunity THG requested the buildings be considered for local listing (in 2014 when application 2014/4579 -use of site to provide 8 bay car wash/park facility for one year demonstrated the then owners complete lack of knowledge and regard for the history of the place and locals.) Since then the former Constitutional Club buildings; Merton Lodge, Field House, the skittle alley, it’s flagpole and Salvador wall (the 18th century boundary rear wall) were nominated and entered on WBC’s map as part of a borough wide review for locally listed nominations; a frustratingly slow process which is yet to be completed. We are aware that local listing would not have necessarily safeguarded these historic assets and as a development of the same scale has already been approved on this site we are reconciled to what will be a substantial loss of Tooting?s built heritage. However we maintain that if we are to lose well-loved landmarks what replaces them must work convincingly with Tooting’s remaining listed and non-listed built heritage; for locals now and for Tooting’s future residents.

We seek assurances that any remaining heritage must be respectfully treated and would expect;

Tooting History Group seeks to cherish that which remains and ensure that the built past has an appropriate and deserved future for all Tooting and Wandsworth to enjoy.

Footnote: Spence Wilson, first club secretary of Tooting Constitutional Club speaking to Samuel Samuels MP, founder of the TCC as reported in the Borough News, July 28th 1929 at the formal opening of Merton Lodge as an integral part of the club; “And when we are all gone and forgotten, your name will live in Tooting and generations of Tootingnites will rise to bless the name of Samuel Samuel. (Loud applause.) It is not often that a bachelor is proud of his baby and boasts about them, but I am sure that Mr Samuel must be proud of this Club, (…) his baby. It has reached a vigorous boyhood and I trust, sir, that when we celebrate its maturity, you will be here with us to (…) rejoicings. (Hear, hear). But I hope that none of us will live to see the Club reach a senile and decrepit old age, and it will continue to increase and be(….) the centre of everything (…)to uplift people.'”