Tooting History Group has been contacted by the architect involved with the planning application for the St. Boniface social hall scheme who requested more information on the presbytery building at 185 Mitcham Road.  We had commented on the proposed development;
‘This major scheme includes the relocation of the presbytery from 185 Mitcham Road a ‘survivor’ (considerably older than noted in the heritage report) that THG has nominated for local listing. Given the everlasting impact of works to a large section of Mitcham Road it would be good for some care and attention to be afforded to this building.’
We shared the following notes with him;
The presbytery at 185 Mitcham Road is currently under consideration for local listing as part of the ongoing borough wide review.  It was nominated by members of Tooting History Group and met Wandsworth Council’s agreed criteria for local listing. Members of Streatham and Clapham Societies supported our application with map evidence, historic building analysis and photographic research.
We understand that 185 Mitcham Road, now known as St Boniface presbytery, predates all other development from Rectory Lane to Tooting Broadway.  It is of a similar age to Field House (part of what became Tooting Constitutional Club buildings, now set for demolition) and it’s neighbouring listed buildings at 91-101 Tooting High Street.
Map extracts in the heritage report accompanying application 2017/6478 show St. Boniface Church built within what was boundary of the garden of no.185 Mitcham Road (previously Church Street) This was then Hereford Lodge and it adjoined York House (187 Mitcham Road where a garage was established in the grounds early in the twentieth century later to be demolished becoming a petrol station and, more recently, to residential use; the White House).
You can see those maps here https://planning.wandsworth.gov.uk/WAM/doc/Report-4408883.pdf?extension=.pdf&id=4408883&location=VOLUME9&contentType=application/pdf&pageCount=1
The presbytery is an early 18th century house with exposed sash windows and their arrangement -smaller at attic level, dating it to c1740.  The shorter part of the building has been heavily altered; bow bays have been added in the Regency period at front and rear, c.1920 the gable, oriel window and possibly then the balcony too, sash windows are also later additions; Victorian or Edwardian.
An oriel window at the side photographed in 1970s has since been removed.
Though rather interfered with externally and obscured by unsympathetic (removable) render, this heritage building, built at a time when Tooting was a Surrey village has outlived all subsequent residential development that flourished on Mitcham Road in the early 19th century.
Some 6 on 6 sashes remain to rear elevations and possibly some of this joinery is original. A back extension has been added in the 20th century.
We know that Charles Edward Stowell is listed as resident at 185 from mid-1870s to early 1900s at least but more research is required on this.
(Thanks to Dave Webber for the black and white image.) 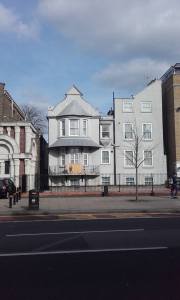 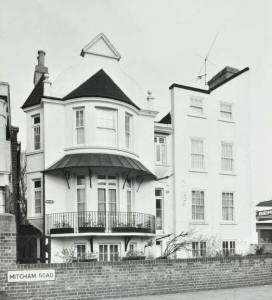